I've built two different power distribution boxes. The first was just a set of 6 jacks to provide power to the various devices. The second one was controlled via USB connection from the Raspberry Pi. I could turn any of the 6 channels independently on or off, and it added 2 temperature controlled heater jacks. It was a great improvement, but something it couldn't do was tell me how much current I was using. It was of no concern when I designed it, since I don't run from batteries. I was a bit short-sighted. It could have told me how much power would be needed if the scope did run from batteries, or if it was even feasible to try. It could have told me if my power supply was too big, too small, or just right.

So I've made some changes to the design and a new PCB. Electronically it is basically the same as v2, but uses better switches, a much better MCU (the Teensy 3.1), and utilizes the current sense outputs of the switches to monitor actual current being drawn by the scope and its peripherals.

I intentionally didn't look at existing power boxes because I didn't want to just clone something. I wanted to build something to fill my needs. To that end, six ports, up to 8A each (20A max total), all switched. The ability to set any ports to auto-on so they will come on at power up. Two dew heaters, both with temperature controllers, and with low frequency PWM rather than high frequency, in the hope that it produces less high frequency noise. Three temperature probes, one with humidity. If the heaters are in auto mode, the controllers will attempt to keep their probe a configurable number of degrees above the dew point. And the current is monitored on all 8 ports. The only thing not monitored is the DC-DC converter that powers the Raspberry Pi, which should be a pretty constant draw of 1.45A.

Although there is a little more circuitry on the board, the board is 30% smaller than v2. I added some resistors and zener diodes, and a larger MCU, but used smaller parts where I could, and used up some of the real estate left open on the v2 board. There is no external EEPROM, since the Teensy 3.1 has a 2kx8 internal EEPROM. The zener, D9, is not on the PCB. There was no room. It is soldered across R27. It protects the Teensy from input spikes higher than 50V.

The computer interface required some additional commands to get the current, power, and amp hours from each port, and the total current and amp hours. The Python program that interacts with the box has been changed to add a page for the power metrics. 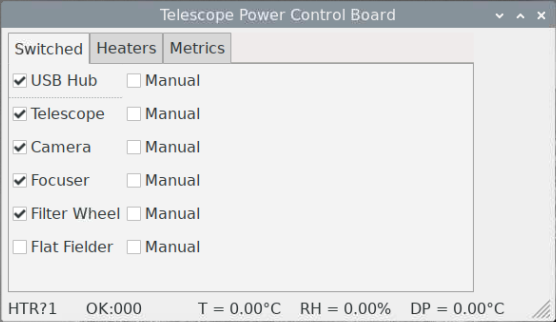 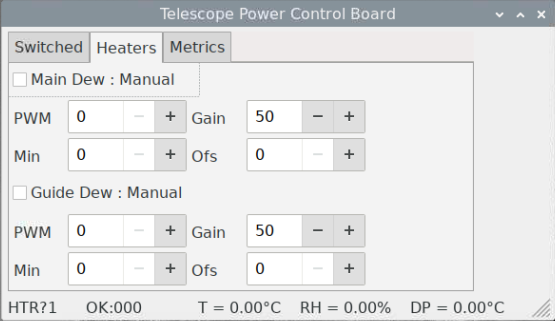 Some of the parts were junk box parts, but most had to be bought. I bought 200 of each resistor value because that was the minimum for those parts (they're 1/8W and tiny). The Teensy I already had, along with the jacks, DC-DC converter, and enclosure from the first power box. I had to drill a couple of holes for the heaters and make a cutout the right size for the Teensy's USB micro B connector.

You'll need to forgive me for using this project to learn wxPython. Both because it looks like a beginner did it, and because you'll have to install wxPython to use the app.

The Teensy 3.x needed to have the VUSB line cut between the pads to separate it from VIN. It is possible to cut the internal VIN trace when cutting the jumper trace. Instructions and warnings are here. Follow the thread using the link at the bottom of that page to see how to fix a cut VIN line.

The high-side switches have current sense outputs. They push a current out of the pin proportional to the current in the main output. It is approximately 1/10000 of the output current, so 1A gives 0.1mA at the sense output. It produces 0.1V across the 1k sense resistor. 12A produces 1.2V. The ADC reference is set to 1.2V, so 4095 ADU = 12A, while 340 ADU = 1A. Of course it isn't that simple. That 1/10000 number is nominal (at -40°C). At different temperatures and output currents it has a different ratio. The data sheet goes into a little detail as to what the ratios might be, in a large range, but for any given part, the ratio is defined by a possibly unique, more-or-less fixed line. The part is intended to tell your car's computer when a taillight bulb is burned out - not necessarily track the current precisely.

To come up with an algorithm for calibrating the sense signal, I built a current sink similar to the one I used for characterizing solar panels. It used a MOSFET and a 0.1Ω 1% resistor to generate a known current. It measured the current through the high-side switch and the current indicated by the current sense output, making 100 readings at current levels from 0 to 8A.

Although the 1.2V reference limits the measurable range to 12A, for practical reasons I limited the current to a little under 8A in the test software. That's the nominal rating on the BTS6133D, and my test MOSFET is only good for 9.2A. The extra 4 amps range is because the hardware and firmware are easier with a 1k sense resistor and a 1.2V reference. And the switches can do more than 8A before current limiting. Max load current is 33A and current limit is 75A. The board would burn its traces off before it hit 33A. The design limit is 20A max total current, 8A max per channel.

This is a plot of the current sense before calibration (green), and after (red) as compared to the actual current (blue). This is for a single BTS6133D mounted on a test board. Compared to the BTS5012 I used on the previous version, the BTS6133D was a joy. The BTS6133D raw sense current was straight as an arrow. A little tweaking and it's perfect. The BTS5012 had hiccups and significant curvature in the sense output.

The error averages just under 2%. It's worse at low amperage, where noise and slope error are more significant, and much better at higher currents, where a small offset is not so significant. Each channel requires individual calibration. I made a harness for testing a single channel, and moved it to each of the eight channels in turn, testing with the MCU pulled from the board. For this test, I compiled the app with the multipliers all set to 1.0 and the adders to 0.0. The current sink was modified to calculate the slope and offset required to correct the signal. Then I transferred those results into the power box code, replacing the 1.0 and 0.0 values, and compiled the app again.

The input voltage is measured right where the supply leads connect to the board. Voltage doesn't really matter much, since I don't have control over it, but the voltage reading under load can indicate problems with the power supply or wiring. For example, a voltage of 10.5V on a 12V lead acid battery would indicate 100% depth of discharge, while a large voltage drop when the camera is turned on could indicate a bad connection between the power box and the supply.

What is the result?

So amp hours per hour calculates up to average about 3 including the camera cool-down. The scope would use around 30AH in 10 hours. Divide by 0.8 to keep 20% charge in the battery and you get 37.5AH. Some math says a 40AH SLA (sealed lead acid) battery would do, with no headroom. There are 55AH SLA batteries available, so that is what I would use. It would take about 18.1 hours to completely discharge the battery, 14.4 hours to discharge to 20%.

After having used it for a while, I've noticed a pattern. I power up the box, if it isn't already. Then I turn on the USB hub, so the peripherals have a USB connection. The telescope uses a serial converter which is plugged into the hub. Then the telescope is powered on. I have a script that I use to initialize the LX600 for remote operation. Once that is run, I turn everything except the flat field panel on. So it looks like the "auto on" feature is not used at all.

If I fail to park the scope before powering it off, when it is powered on, it comes up to a menu which requires user input. So much for a remote telescope using the LX600. I'm trying to find a command that it might take that allows it to get past that prompt, but I don't have much hope.